Have You Forgotten How To Cleave? 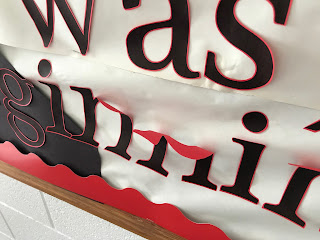 Five weeks after I put up the Easter bulletin board in the church entryway, I went back to change it to a patriotic theme. To be honest, I hadn't been back there for a few days, so I didn't realize that it was falling apart.

Double stick tape is my adhesive of choice when I'm just attaching paper to paper. These were hand-cut letters on a white paper background, so they should have held. But thanks to gravity and people leaning on it and brushing past it, some of the letters were almost completely unstuck.

While we're not held to anyone or anything with sticky tape, each of us is still jostled around and pulled away from the love that matters most in our lives.

But take diligent heed to do the commandment and the law, which Moses the servant of the LORD charged you, to love the LORD your God, and to walk in all his ways, and to keep his commandments, and to cleave unto him, and to serve him with all your heart and with all your soul. Joshua 22:5

Joshua knew, as he was giving the Israelites his final speech as leader of the people, that they could and would be easily turned away from the Lord. The only way they could survive in the days to come would be to completely cleave to God alone. The word cleave means to stick fast to, to adhere strongly to or to become very strongly involved with or emotionally attached to. This adhesion meant that wherever God went, the people went. Wherever He led them they were to go, and whatever He asked of them, they were to obey.

But just like the letters on my bulletin board, the stickiness of cleaving lost its power. It wasn't long before they were caught in disobedience instead of stuck fast to the Lord. The people were soon falling off by the wayside, attracted by the sparkle and allure of other things.

Sound familiar? When times are good, we forget how to cleave because everything seems to be going just fine. Then, in the difficult times, when we need Him most, we're not as emotionally attached to Him as we should be. We put ourselves in a worse situation because now we aren't as strongly involved as the word cleave means we should be.

Have you forgotten how to cleave? Are you stuck fast to God because of your prayer and Bible study, or is your sticky starting to lose its stick-to-it-ness? Today is the day to resolve to involve yourself completely with the Lord and emotionally attach yourself to Him. Let nothing pry you away or try to loosen your hold on Him. Yes, it's a command, but it's also a way to protect yourself from falling away and ripping apart.
Scripture

January 16
Today’s reading: Exodus 1-3
Thought for the day: Whether it's the years spent in the palace, decades on the backside of the desert or hours spent in heart-wrenching prayer, remember that this too shall pass, as God always has His way in our lives.