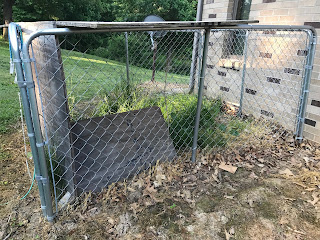 There's a reason I'm sharing this picture of an empty pen with you today. A few years ago, because of our acreage and willingness to help, we were asked by the DNR to assist them in rehabilitating wildlife, and this is one of the areas we have set up for orphaned fawns. We're glad to see it empty because that means the babies are out in nature where they belong, not in an enclosure fighting for their lives.

Before I go any further with my plea today, I want you to understand something very specific about what we do. We don't go around looking for animals to help, and we don't let anyone drop off animals with us. We work directly with the DNR and receive animals from them and them alone. It's a good year when we never receive a call, though we're prepared if they need us.

It's been both a joy and a heartache over the years because, while we're able to give animals a chance they might not otherwise have had, there are very few times we're able to save them. The main reason for this is simple: human intervention. It's human nature to find cute things in distress and try to help them. We understand that. We also understand that most people have kind hearts and hate to see any living thing suffering. That is kind and commendable, but it's also dangerous to the well being of wildlife. Two experts we talked to this week said this has been one of the worst years for people calling about animals they had found and taken home. The results are never good, and the animals rarely lived.

Just a few days ago we were called to prepare for a fawn whose mother had been hit on the road. A nice man saw the fawn, removed it from the area and took it home. This sounds like a wonderful Good Samaritan, but it was the worst thing he could have done. He had the right information on what to feed it, but not how much to feed it. Instead of taking care of it, he actually killed it by overfeeding. There are certain amounts and ratios that are best for the fawn, but he didn't know that. What he had meant for good turned into a sad experience that could have been avoided.

Something similar happened a couple of years ago when some folks in town found a baby nighthawk. They gave it some random things to eat for a while before turning it over to the DNR. By the time we received it, it was just a matter of hours before it died. Human involvement shortened its life when they should have left it alone and allowed it to live in a natural way of things.

This has been a terribly difficult lesson to learn because the heart wants to love, cuddle and protect. We want to heal the sick, care for the lonely and be able to say we did a wonderful thing. With wild creatures, however, this is probably the worst-case scenario for their lives.

God planned how nature would work from the very beginning, and He's been taking care of it ever since. If we were to put our hearts aside and let nature have its way, rehabilitators would be totally unnecessary, and we'd be ok with that. People getting involved, no matter how kind-hearted they are, simply make the problem worse, not better.

So my simple request to you is this: if you see any wild animal, regardless of size or cuteness, leave it alone. Don't touch it, don't talk to it, don't even look it in the eye. Don't feed it or try to move it. It may hurt your heart, but you'll be hurting the animal more. If it lives, it lives and that would be wonderful. But if it doesn't, that's fine, too. It may be hard, but please just walk away. If it's still there a day or two later, call a wildlife expert to come analyze the situation. Let them do what they're trained to do. It's the best thing for everyone, including that animal.
Around the House