Why We Love Bullriders Of America! 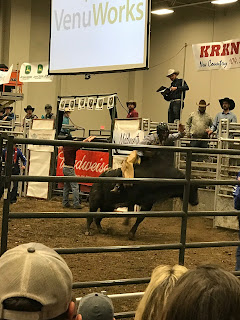 Several years ago, I was working at the newspaper when we learned that Bullriders of America would be holding their year-end finals competition at the Bridge View Center. This city girl knew nothing about bullriding, except that there were bulls and riding involved, but I was the reporter chosen to cover the event. Little did I know that it would become one of my favorite times of the year.

I had to start with the basics of bullriding to be able to write about it coherently, so I spent three days talking with everyone I possibly could - riders, the barrelman, the secretary, judges, the announcer, the bullfighters, even the stock contractor. By the time I was done, I was hooked. Since then we have been to the finals competition almost every year, and it's an event we look forward to each time. 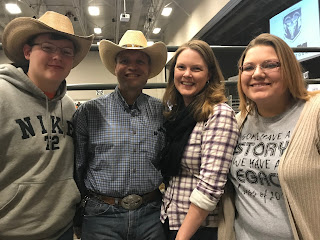 This weekend we were able to take two friends of ours with us, and we had so much fun. Twenty-five bull riders attempt to ride four different bulls, trying to earn enough points to become the finals champion. There were tons of thrills, plenty of spills and the chance to see one rider cover all four bulls. It was a great time, and the crowd participation made it that much more exciting. 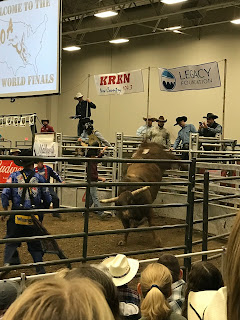 We are always amazed at the tenacity it takes to ride a bull. We laughed at the local "celebrities" as they fell off within seconds of beginning their tiny bull ride, but to watch the seasoned veterans hang on to the very end was amazing. When you watch a bull rider hold on for dear life, then get thrown and trampled by a 2,000-pound bull before getting up and leaving the ring under his own power, it makes you appreciate his efforts that much more. We cheered as loud as we could for as long as we could.

If you've never been to a bullriding event, put next year's finals on your calendar now. You won't want to miss it.

Bullriders of America
Bridge View Center
Around the House