The Four Failures Of Saul's Army 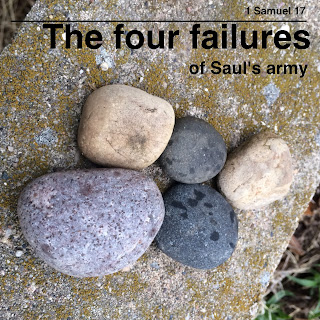 From the time we were little, we heard the story of David and Goliath. As tiny little people we learned about being courageous, fighting the enemy and giving God the glory for our victories. What better way to encourage children than with the story of a young man who faced death in the name of the Lord?

In the midst of the drama and tension of the fight scene in 1 Samuel 17, the actions and reactions of the Israelite soldiers often sneak past us. Their actions - or lack thereof - should be just as important a lesson as letting God guide the stones when you let them fly.

About one-third of this chapter describes the army and its shortcomings, and there are four very distinct F's that became chinks in their armor.

1. They forgot. How many times do you read between Genesis 1 and 1 Samuel 17 that God had given them the victory? How often did He tell them that the battle wasn't theirs, but His? They had witnessed His power for themselves so many times, but here, in the heat of battle, they simply forgot that the God of all creation was fighting for them.

2. They feared. They weren't just afraid - verse 11 says they were greatly afraid. This was the result of failure #1. When they forgot the power of the Lord, the giant before them looked entirely too big. Doubt leads to fear and fear leads to greater fear unless it is tackled immediately.

3. They froze. For 40 days Goliath came out and did his trash talking. And not just once a day, but twice, morning and evening. Did anyone go out to fight? Did any soldier come up with a battle plan? Was anyone so sick of these threats that they did something about it? No, they didn't. They let Goliath come out 80 times and ridicule the army and its God. These soldiers were the perfect example of being frozen in place.

4. They fled. When the giant came out for the 80th time, while David stood listening to his boasts, the men of Israel turned tail and ran. Verse 24 says they fled at just the sight of him and were suddenly sore afraid. As time went on, as Goliath returned day after day, the Israelites' fear was growing. Each time they forgot God's promises, a little more fear built up. When they didn't turn their fear over the God, it grew. When they stood frozen in place instead of following their battle plan, the fear multiplied. By the 40th day, their poor choices drove them away from the field of battle completely.

We each have a choice as we face our giants today. We can side with the army and find ourselves failing time and again. Or we can make the good, courageous choices that David did and trust God to fight for us. Victory only comes when we turn ourselves over to the Lord and let Him use us as He sees fit. And since we've read the back of the book and know that we win, we can rest in the promises that He will be with us in every battle we face.
Scripture