A Week Of Losing Part Of You 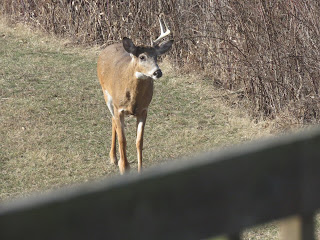 We have three bucks on the property right now, along with several does. The oldest buck is a 10-point, while the other two are much smaller. He has the most girlfriends right now and the younger ones only have one. Yes, we're pretty familiar with the details of their lives.

One of the young bucks lost an antler this week. He looks a little side heavy now, and I can only imagine what the other deer are saying to him. I'm excited to get out on the property and see if we can find the shed. There are probably many of them out there just waiting to be found.

And if thy hand offend thee, cut it off: it is better for thee to enter into life maimed, than having two hands to go into hell, into the fire that shall never be quenched. Mark 9:43

The buck doesn't have a choice about keeping his antlers or losing them each year. We have a choice as to whether we will keep the things we love most or give them up because they've become a stumbling block. This is what Jesus was speaking about in this passage from the book of Mark. We have been given some amazing things in our lives, but if they are a temptation to sin or something that won't lead us into greater holiness, they have to go.

Make this a week of losing part of you. It definitely doesn't have to be a hand, but you probably know exactly which things in your life are holding you back. Crucify the flesh, check your heart attitude and purge anything you find that doesn't draw you closer to Christ. You'll probably find, once they're gone, that you really didn't need them at all.
Photos Scripture