A Week Of Being A Spectacle 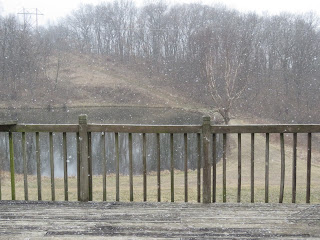 Even though it's still winter in Iowa, snow has become something of a spectacle. We've only had a few flurries this year, nothing more than a few inches, so it's been odd weather for us.

So when we had some huge snowflakes this week, everyone got excited. It was too warm to stick, but it was fun to watch it coming down. And at least no one had to shovel it!

For I think that God hath set forth us the apostles last, as it were appointed to death: for we are made a spectacle unto the world, and to angels, and to men. 1 Corinthians 4:9

The definition of a spectacle is something visually striking, like a performance or display. The event or scene is regarded in terms of its visual impact, how it appears when brought out into the light. When something is different, new and out of the ordinary, it captures the attention of everyone around it, just like the snowflakes that come out of nowhere on a fairly warm day.

Make this a week of being a spectacle to the world. Christians have a calling to be different, set apart from what the world considers normal. We are brought out into public view, before people who see everything, both good and bad. Our testimony is at stake every single day, as we live our lives for the true and living God. Don't be ashamed of being a spectacle, but embrace the opportunity to have visual impact as an ambassador for Christ.
Photos Scripture