The Man In The Camouflage Shirt 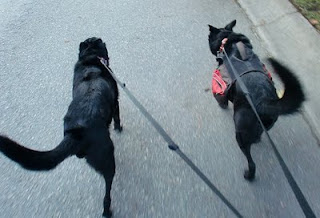 I see the man in the camouflage shirt every morning. He and his dog (a tiny gray mop without the stick) walk at about the same time we do. Some days we chase them around the neighborhood and other days they chase us.

Our interactions on the road are pretty patterned. The three dogs see each other and then try to pull free to visit. This usually results in barking, bristled fur and dislocated shoulders. I always feel terrible because the gray mop usually ends up in the man's arms.

The man in the camouflage shirt and I have had one real conversation - we introduced ourselves one morning and I met the gray mop. He's a sweet little puppy, but they can't trust him around other dogs. I don't know what's happened in the past, but they're not comfortable with him actually meeting the girls. I think it would solve some of the interaction issues, but I also don't want to make the problem worse. 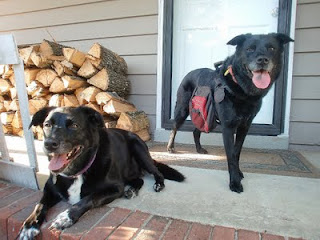 After not walking those 10 days that I was on vacation in Iowa, the girls have gotten back into the "first-thing-in-the-morning walk routine" very easily. But since I've been home, we've only seen the man in the camouflage shirt once. We were walking past his house as he and the gray mop were coming out for their walk. Pulling ensued, growling began and we hurried past. We even took an extra long route so they would be through their walk before we came back by.

Since then, the only time I've seen the two of them is well after we three are back in the house. Apparently the man in the camouflage shirt has adjusted their walking schedule so we won't overlap. I pray that I'm taking this too personally and it's merely a coincidence. I would hate to think that someone is changing their routine because our dogs don't communicate well.

Perhaps the opportunity will arise that we can do a puppy meet-and-greet to get all of these formalities out of the way. I don't have a problem with them sniffing and having a morning conversation - one that's carefully watched over while on leashes. We'll just see how things go. And how my schedule matches up with the man in the camouflage shirt and the little gray mop.
Pets