A Lesson About Two Kinds Of Blessings 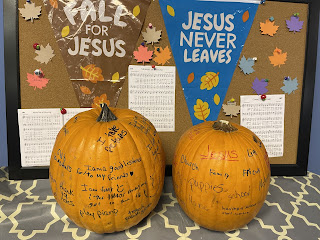 I threw our youth group for a loop a few weeks ago. We had been studying blessings leading up to Thanksgiving, and we’d created a beautiful fall mood board with songs and blessings and leaves everywhere. As we walked past the little kids’ table where they were decorating pumpkins, I grabbed two big pumpkins and toted them down to our teen room. They were very excited that they were going to get some pumpkin carving time, too.
The confusion grew when they realized there were just two pumpkins and way more of them. That’s when we sat down and talked about two kinds of blessings.
One type of blessings is the kind we receive with joy and appreciation. God answers a prayer in a beautiful way. A friend shows up at just the right moment. The mail has a fun surprise inside. A message on your phone makes you smile. You learn that you’re being prayed for, thought about, cared for, even spoiled a little. These are the blessings that come when you need them most because they change your mood, your attitude or your life.
The second type of blessings may be a little more difficult to recognize. They’re the blessings you give other people. When you simply send a note to someone special. You make a double batch of dinner and drop it off at a friend’s house. You volunteer to supervisor the nursery at church without being asked.
Why are these more difficult to admit are blessings? Maybe it’s a little bit of humility? We don’t think of the many things we do as having much impact. They only take a few minutes, no real effort, so are they really that important?
Yes. Yes they are. A friend told me recently that she had been going through a difficult time when she received three notes from friends. They had no idea what she was going through, but each one shared loving, supporting words when she needed them most. Those notes may have been written and mailed in just a few minutes, but their impact went straight to her heart.
So, back to our pumpkins. Both pumpkins were labeled “blessings,” but there was one pumpkin for each kind of blessings. On one pumpkin, the teens could write absolutely anything they considered blessings. Once they wrote friend, family and Jesus, though, they had to get a little more creative. Soon they were talking about things happening at school, gifts they had received and people who touched their hearts with their actions. It became one of the deepest, most honest conversations we’ve ever had in that room.
Then it got even more serious when they had to write ways they bless other people on the second pumpkin. Like many people, they weren’t really sure how their words and actions affect others. They’re just things they do, often without thinking of them as blessings. But as soon as we broke the ice with teaching youth group and playing the piano (yes, both mine), something clicked. They talked about how having a great sense of humor sets people at ease. Taking beautiful pictures and posting them on social media makes people smile in a world of discouragement. Being a good listener gains people’s trust and gives them a place to go when they hurt. Soon the second pumpkin was covered in many more blessings than the first one.
The lesson I learned wasn’t about using Sharpies on pumpkins to pass some time on a Wednesday night. It was about how I view the things I do through someone else’s eyes. I don’t want them to see me or to think I’m awesome for what I do. I want them to see the Lord and His love as I become His hands and feet here on earth. As we finish our pumpkin lists over the next few days, we’re go to thank and praise God for both sets because they all come from Him.
Scripture Youth Group