Relax and Learn With A Youth Group Game Night 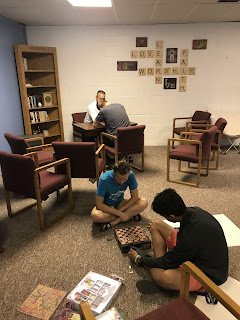 One of the most difficult responsibilities of youth group leaders is to balance learning and fun. Too much teaching and our teens get glassy-eyed and restless. Too much fun and they see it as a social hour.

Our Wednesday night schedule is pretty unique - we meet at 6 p.m. for crafts or games that are going to tie in to that night’s lesson. It’s always amazed me how much our youth love having a few minutes with a coloring page and some colored pencils. Then we go upstairs for the song service with the adults. At least one of them will request a hymn every week, which absolutely delights my heart.

After that 15 minutes or so, we go back down to the teen room for the real meat of the lesson. We all have our notebooks and pens, and we let them use the Bible programs on their phones for reading Scripture out loud to the group. Some youth group leaders refuse to let their teens have their phones, going so far as to put them in phone jail until the end of the evening. For us, though, we’ve learned that when they use and learn about their Bible app, they’re much more likely to use it during the rest of the week. They have their phones with them 24/7 anyway - why not show them how to do Bible study on it?

For last week’s youth group, we let them have a game night. They could challenge anyone in the room to anything - within reason. They could thumb wrestle, play chess or have a verticals jump contest. If they won, they got 10 yards on our football field drawing. The first one to score a 100-yard touchdown was champion of the night. It was so much fun to watch the checkers tournament and the thumb wrestling competitions. The best, though, was our teen guys thinking they could beat Danny at arm wrestling. Let’s just say that Danny is still the reigning champion... 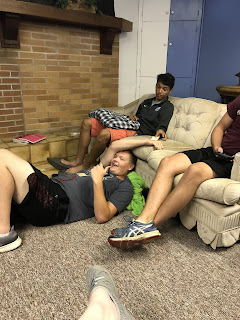 After the song service, we gave each teen a card from the Pictionary game and told them to pick one word from that list and find it somewhere in Scripture. Then they would read the verse, without putting emphasis on the chosen word, and we had to guess which word they had on their card. Lastly, they had to read the rest of the words, the ones they didn’t use. What followed was a half an hour of reading, laughing and making some amazing memories. Think about getting a list of words like police car, flying fish and ski jump. I’ve never heard them laugh that hard.

Youth group dosen’t have to be lectures and verse-by-verse, in-depth study. Just knowing a little bit more about what can be found in Scripture, and what can’t, is a lesson itself.

And we’re still looking for that flying fish on the ski jump verse. And there was a police car.
Youth Group