Where Are You Running? 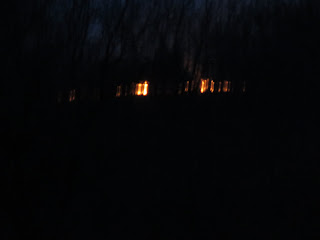 On Saturday night, we noticed some lights on top of the ridge. We have two neighbors back that direction, but we weren't concerned just yet. As the lights continued to grow, we realized they were tiny fires, like they were working on a burn pile.

Over the span of a few minutes, the fires had grown considerably. We continued watching them grow and spread until we were getting concerned. It's been fairly dry here over the past couple of weeks, and a good wind would send the flames in our direction.

It wasn't long before we saw flashing lights and heard the sirens of the fire trucks coming. The flames were huge, and it took the better part of an hour to put them out. We so appreciate our fire department for stopping what could have been a disastrous situation.

At one point in the firefight I took the dogs outside, and I was amazed. I could hear the rush of the flames on top of the hill, but I could also hear pounding footsteps through the leaves on the ground. The animals that were in that area when the fire started were now, very clearly, running towards us. Think of a movie scene with stampeding animals, and that's what it felt like.

Those animals knew they were in danger, and they knew that they could head this way. That's one of the reasons we call this the Carrell Wildlife Preserve. They also knew which way the flames were going, and they knew they needed a safe place. We're just glad they chose here.

As I stood there listening to approaching paw steps, I thought about running to the safe place of God's presence.

The fear of man bringeth a snare: but whoso putteth his trust in the LORD shall be safe. Proverbs 29:25

Whether it's temptation, fear, doubt or something else that makes us want to turn tail and run, we have a safe place to go. Safety can always be found in the Lord. Our trust should never hinge on the height of the flames or their heat, but in the unwavering belief that God is in control.

As you being your week, I pray that every situation you find yourself in will push you closer and closer to God's side. There is safety, rest and peace there - more than enough to get you through the circumstances and bring you out the other side victorious.
Scripture