A Narrative On Rocks And Snowflakes 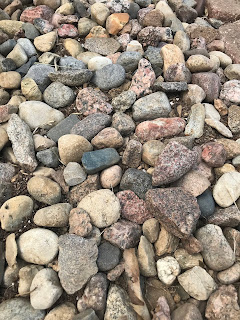 While redoing our corner rock garden recently, I hauled bucket after bucket full of rocks from different places on the property. I was honestly surprised at how heavy they were and how many loads of rock it took to cover that small garden plot.

And because I handled each and every one of these rocks individually, I noticed something very interesting about them: no two were exactly alike. Sure, there were hundreds of gray rocks, rocks with red speckles and rocks with little holes in them. But despite being in the same category of rock, they weren't identical by any stretch of the imagination.

These rocks are very much like snowflakes. All snowflakes are hexagonal (they have six sides in the middle), but they are each slightly different. How boring would it be to see a sky full of the exact same snowflake falling? There's no room in our lives for cookie cutter snowflakes, right?

But now hath God set the members every one of them in the body, as it hath pleased him. And if they were all one member, where were the body? But now are they many members, yet but one body. 1 Corinthians 12:18-20

Paul explained to the church in Corinth that if every one of them had the same spiritual gifts, they would be lacking some important pieces in the body of Christ. God had given them exactly what they needed as a church to support, encourage and grow as a church body. Each body part had its own place and use that no other part could make up for. This was God's perfect design.

So the church was like our rock garden - they were all Christians, but they were each different and special in their own way. They would function adequately if they were all the same on the outside, but they could flourish because they were all different in the unique gifts they had been given.

None of my rocks want to be like other rocks. They don't get jealous over color and shape or where they're positioned in the garden. (Mostly because they're just rocks, but I think you understand my point.) What makes the garden pretty to look at is that there's a variety of colors, shapes and patterns all mixed together. Otherwise it would be dull and boring to the eye.

Your church body is filled with special and unique people. No one is the same and no one should be wishing they had the same gifts and talents as anyone else. We have each been graced with God-given abilities to use for His honor and glory. How we use them is up to us, and it will be a beautiful sight to behold when we're exactly where He wants us to be.
Photos Scripture