A Weekend Of Standing Out 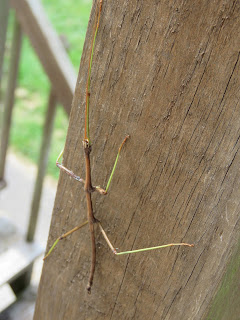 As I was out on the deck recently, this walking stick caught my eye.

Now, this is the exact opposite of what should happen. A walking stick bug is specifically designed to blend in to its home in the woods. It looks like a stick so its predators will think it is just another stick among sticks. This is very smart camouflage for an insect that lives in the woods of our property.

But he wasn't in the trees when I saw him - he was on the deck railing. If he had been sitting on a pile of twigs stacked not he deck, that would have been a different story. But there he was, just hanging out on the old wood of the deck.

A walking stick can't blend in with the background when he's on the wrong background.

Jesus prayed for His disciples, not that they would be spared from the things to come in this life, but that they would be protected and prepared along the way. Christ asked His Father to share with them all His truth so they could be salt and light to a lost and dying world. This is how they would stand out - people would know that they were different on purpose.

Make this a weekend of standing out. The walking stick would have blended in and gone unnoticed if he had stayed in the trees with all of the sticks. Instead, he wandered out to somewhere different and could easily be seen. The people who need you the most will see Jesus shining brightly through you when you're right where He wants you to be.
Photos Scripture