A Weekend Of Staying The Course 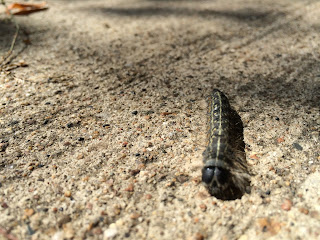 One afternoon Sadie, Molly and I found two fuzzy caterpillars on the driveway. One was bright orange and brown, and the other was this pretty green one. He was shorter than my pinkie finger, but he was trucking along from one side of the drive to the other with amazing speed.

Sadie was quickly bored, but Molly was fascinated by this tiny traveler. (Okay, everything is tiny to Molly, but you get the picture.) She only stepped on him once, but not even a paw the size of a coffee cup stopped his forward momentum.

To keep him away from the very large dog, I used a tiny stick under his middle to carefully lift him and send him in another direction. But instead of heading that way, he immediately spun around and double-timed it on his original course. No matter how many times I tried to get him to go around Molly so she wouldn't crush him, this little guy was determined to make it to his destination, Great Dane or not.

For I am now ready to be offered, and the time of my departure is at hand. I have fought a good fight, I have finished my course, I have kept the faith: Henceforth there is laid up for me a crown of righteousness, which the Lord, the righteous judge, shall give me at that day: and not to me only, but unto all them also that love his appearing. 2 Timothy 4:6-8

Paul experienced more roadblocks in his walk with the Lord than many of us will ever experience. Any number of them could have turned him away from his forward momentum. They could have knocked him off course, frustrated him or stopped him dead in his tracks. But his determination to fight, finish and keep moved him on no matter what landed in his path.

Make this a weekend of staying the course. We know what it's like to stumble and reach the point of giving up, but there is something wonderful and perfect waiting for us at the end of our journey. We will receive the crown of righteousness with joy and gladness because we have refused to allow anything to stand between us and the end of our course, the final battle and the finishing of our faith.
Photos Scripture