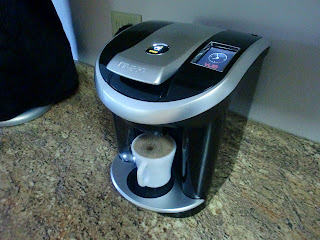 We needed a new coffee pot ... desperately ... so we splurged a little and got the new Keurig Vue. Now, I don't usually given product endorsements, but this machine is so worth it, that I just had to tell you about it.

Basically, you keep the water chamber filled all the time and use the newest version of the individual coffee packs Keurig has invented. There aren't as many flavors yet as there are for their older version, but they say they're on the way.

The convenience: It's programmable, so it will be all warmed up and waiting when its little internal timer goes off. It only takes a couple of minutes to heat the water, and you can program it to start up and shut down whenever you want. Plus, it uses prepackaged grounds, so you don't have to measure anything.

The timing: Again, it only takes a couple of minutes to warm up, but you can set it so it's ready when you walk into the kitchen. Then it takes less than a minute to pop in a V-cup of grounds and have the coffee brewed.

The cleanup: Or lack thereof. The coffee goes directly into the cup, so there's no pot to maintain. You use the old V-cup to run cleansing brews through the machine, keeping it clean in less than a minute, too. Just rinse and and clean the water chamber when it gets low and you're all set.

The variety: While there aren't as many flavors as the older version of the machine, because it's a single-cup coffee maker, you can mix and match the flavors any time you want. That means you won't have one large container of coffee in the cabinet that you're trying to get through so you can move on to something else.

The personalization: The touch screen allows you to choose the size, strength and type of drink that you're creating. So I can have a 10 oz. cappuccino that's regular strength, and then Danny can immediately have a 12 oz extra-strong coffee. All you do is punch in your specifications, run a quick cleansing brew in between and fix the next one.

What especially tickles me is reading people's reviews of machines like this. People are VERY particular about their coffee, and they have VERY strong opinions about what they like and don't like. For example, I read terrible reviews about the Keurig hot cocoa. They said it was horrid and had a terrible after-taste. Despite the disappointment they showed, I tried the one that came in the variety box with our machine. To my surprise, it was very possibly the best cup of hot cocoa I've ever had. Now I'm excited to try the dark chocolate version.

One reviewer gave the best suggestion for a review I've ever heard: If you're done reading everyone else's opinions, go get one and make your own decisions. We did, and we're loving it.
Cooking