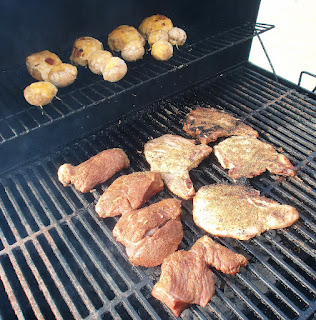 Over the weekend, I decided that I was going to grill - all by myself. Now, I've helped plenty of times, even planned the menu before, but I've never done the whole process alone.
Danny was going to be at work all day Saturday, so this was the perfect opportunity. I went to the grocery store and got a package of fresh beef short ribs and four large pork chops. It's good to be in Iowa. I added four twice-baked potatoes and eight crab-stuffed mushrooms to the order and I was set.

We have both a gas grill and a charcoal grill, but I chose the charcoal. It's the one I've used and seen used more often. I carefully followed Danny's instructions and made a pile of coals in the middle, then covered them in the special lighter fluid and let that sit for a few minutes. Then I spread them out a bit so they'd cover a wider area and cool off a little. (I learned later that I hadn't spread them out quite far enough so my heat was a bit too high.)

I sprayed the grate with cooking spray and it was time to add the meat. The beef went on first since it was thicker. Then the chops. The sides went on last on the upper grate. They just needed to get hot since they were already cooked. I sprinkled the beef with Season All and the chops with Montreal Chicken for a little more flavor. (Not too much or the meat gets really salty.)

About this time, Danny came home, so he was able to help me with cooking times. That's always my biggest fear - that I'll overcook something and disappoint everyone. The chops were done well before the beef, and I could have left the sides on for a little longer, but other than that, everything turned out great.

Now, I'm not a big beef eater, but the ribs were my favorite part of the meal. They turned out juicy and tender with just the right amount of seasoning. Lovely!

It was such a wonderful learning experience - and eating experience - that I can't wait to do it again. But maybe I'll wait until it's not 100 degrees in the shade ... maybe.
Cooking