July 24, 2012
Have you ever had one of those projects that just swirls around in your brain for days and weeks and months? This chicken wire frame flower vase art was mine. 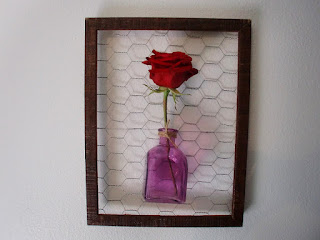 This week I finally had all the supplies on hand - a $4 picture frame from the thrift shop, chicken wire from the farm supply store, the vase I gave my mother-in-love flowers in when they were here to visit and some twine from my craft room. 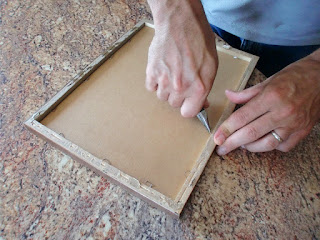 Yes, I let Danny do some of the hard work. You have to take the frame completely apart, including removing the glass, and some frames have some staples left in. He was sweet enough to take them out for me with a pair of needle-nosed pliers. That was a huge help! 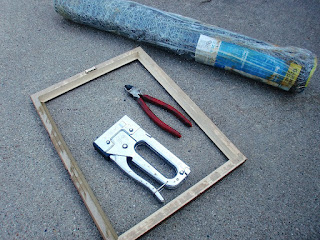 Once you get the frame down to its bare bones, you'll need a pair of wire cutters and a staple gun. Each of these was easily accessible in our garage. Danny showed me how to use each one because, to be honest, I had never had to use them before. 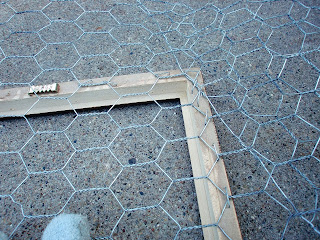 You'll want to wear work gloves from here on out because chicken wire is thin, pointy, sharp wire. It's also easier to bend and work with if you're not concerned about profuse bleeding and gouging of the digits.

Staple the wire to the back of the frame, making sure you hit the spots where the wires cross. My staples didn't go in all the way because the frame was super thick wood - which is what I wanted. That's OK, though, because I just whapped them with a hammer when I was done and they went in the rest of the way. 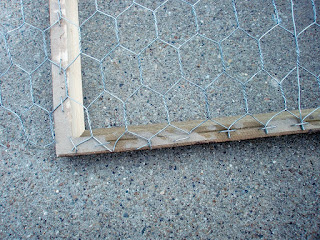 Once you've stapled all the way around the frame, use the wire cutters to clip up close to the edge of the staples. If any of the wire still hangs over the edge, just bend it back until it doesn't show. You'll also want to trim a little extra around the hanger so it will be flush against the wall.

Then you just tie the vase to the chicken wire and you're set. I looped the twine around a couple of extra times because my vase was a little chunky and heavy. Then just hang it against a solid background so you can see the shape of the chicken wire in the background. Beautiful!
﻿
Around the House Crafts