Bailey and Her Frog 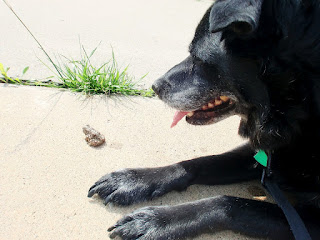 One of the neatest parts of living in the country has been exposing the girls to things they never saw in the city. Sadie loves to chase the geese, and Bailey really tries to peek in the bird's nest to see the babies.


And just this week, Bailey discovered her very first frog. No, she didn't try to kiss it and turn it into a prince. But she did try to eat it. Well, she carried it around in her mouth anyway. We had to have a quick lesson in "Frogs Are Friends, Not Food."

So instead of snacking on it, she decided to follow it around the driveway. Apparently she scared it stiff, because it just sat there for long stretches watching her. Eventually she sat down next to it and just watched it back. Every now and then she would nudge it with her nose and it would hop a foot or two away. Then she'd get up, walk over to it and lay back down. She must have done this four times over the course of 10 minutes or so.


Then Danny came outside and she just had to show her daddy what she found. There went the frog back in her mouth. He rescued the poor little thing and released him into the grass. Bailey still wanted to follow it, so she waded through the grass after it, sniffing and tracking. Two days later she was still trying to find her little friend.

I just hope he survived his ordeal with the big, black dog. He's probably telling all his froggy friends about it to this day! And they just roll their eyes and tell him they've heard that one a hundred times now.
Pets