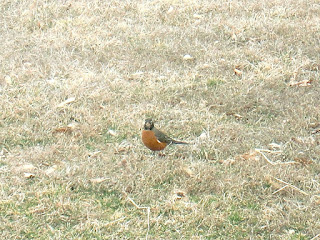 I watched the little robin as he tried to make headway across the yard. He had a terribly strong wind to contend with and he was having problems keeping forward momentum. He had to walk because flying was out of the question with so much working against him.

The winds have been incredibly strong here this week, and he was such a tiny little thing. I'd had trouble just getting the car door open because of the wind, so I couldn't imagine how he would be able to fight it.

And then I understood how he was progressing. He would walk until the wind picked up, and then he would plant his little feet as firmly into the ground as he could. He tucked his little chin down and braced himself against the gale while his feathers ruffled and the leaves whizzed past.

Once the wind died down, he would fluff himself and walk a little further. When it turned from breeze to forceful wind again, he planted himself, tucked his head and waited. Otherwise he would have ended up in the next county, far away from home.

This little robin is the answer to making it through the hurricane of winds in our lives. We can't try to fly away or push against everything that comes our way. We have to ground ourselves firmly in the Lord, tuck our heads against the gale-force winds and wait them out. To do otherwise would be attempting to change our circumstances ourselves, and that just isn't humanly possible.

And you, that were sometime alienated and enemies in your mind by wicked works, yet now hath he reconciled

In the body of his flesh through death, to present you holy and unblameable and unreproveable in his sight:
If ye continue in the faith grounded and settled, and be not moved away from the hope of the gospel, which ye have heard, and which was preached to every creature which is under heaven; whereof I Paul am made a minister;
Who now rejoice in my sufferings for you, and fill up that which is behind of the afflictions of Christ in my flesh for his body's sake, which is the church:
Whereof I am made a minister, according to the dispensation of God which is given to me for you, to fulfil the word of God;
Even the mystery which hath been hid from ages and from generations, but now is made manifest to his saints:
To whom God would make known what is the riches of the glory of this mystery among the Gentiles; which is Christ in you, the hope of glory:
Whom we preach, warning every man, and teaching every man in all wisdom; that we may present every man perfect in Christ Jesus:
Whereunto I also labour, striving according to his working, which worketh in me mightily. Colossians 1:22-29

So are you grounded in Christ, or are you struggling against the wind of circumstances?
Around the House Scripture