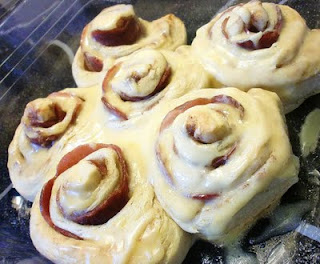 Sometimes you read about something and you just have to try it for yourself! Just hearing the words "bacon cinnamon rolls" peaked my interest.

I'd seen several versions of this decadent breakfast treat, and I just had to make my own. All you need is a package of refrigerator cinnamon rolls (I chose the orange variety) and a package of bacon (I used turkey bacon). 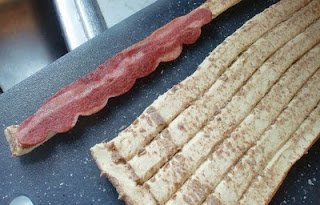 Start out by lightly cooking your bacon. You want it to be warmed up but not crispy. You're going to roll it in the dough, so it needs to be pliable. Just a couple of minutes on each side, enough to brown it, is plenty.
Open up your package of cinnamon rolls and unroll them to lay flat. On each roll, lay one slice of bacon. Tightly roll the combination back up and place in a lightly-sprayed baking dish. 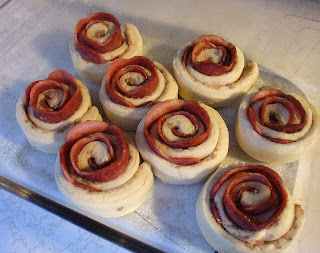 Bake your bacon-filled cinnamon rolls according to the package directions. Let them cool for a minute or two and then slather with frosting. They're super-duper filling, so find someone special to share them with!
Cooking