Gone Fishin’ ... There’s A Sign Up On Your Door 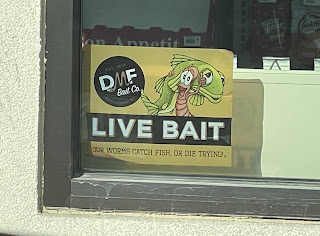 While I was sitting in the truck at the local convenience store, I did a double take at this sign.
The small print says “Our worms catch fish or die trying.” I laughed out loud at the worm carrying a fish, then at the pun because that’s pretty good. I’m always up for a good pun, the punnier the better.
The double take was when the spiritual connotation hit me. Whenever I think about fishing, which we can do in our ponds soon, my mind goes to Jesus making His followers fishers of men. Then for the rest of their lives, they would be fishermen of an eternal sort.
Many, many of Jesus’ followers fished for men until their very last breaths. Many of them died in terrible, horrible ways, but they chose to be faithful to Christ until the end. They died trying to bring in their net for Him, no matter what the consequences.
As long as we’re alive, let’s put the sign out on our door that we’ve gone fishin’. Fishin’ to the very end.
Photos Scripture