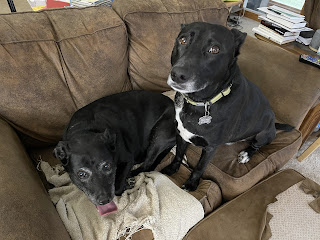 When we adopted Parker, we knew that he had thunderstorm anxiety. He had some medicine to take the edge off, but it wasn’t really helping the situation. Plan B was just cuddling and loving and turning on some music to drown out the rumbles. Earlier this week, though, Diesel took it upon himself to help Parker feel better during a pretty intense storm. Parker was by himself on the couch, panting, and Diesel jumped up and sat next to him. 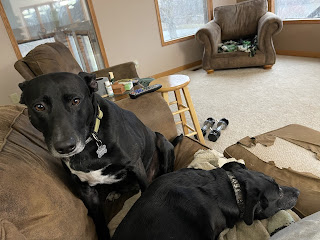 This was unusual in itself, as Diesel normally doesn’t get worked up over what’s going on around him. After a few minutes, he moved around to Parker’s side and just kept him company. He didn’t seem to mind that Parker’s panting was shaking the entire couch. He just sat there, touching Parker’s side with his leg. 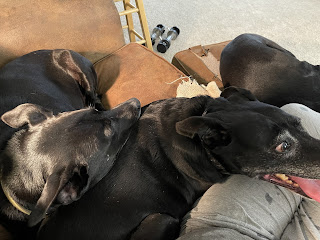 Eventually, when Diesel saw that Parker was calming down, he laid with his head on Parker’s back. Even when a flash of lightning would make Parker shake and pant again, Diesel would just shift a little and calm him back down. It was very possibly the sweetest things I’ve ever seen this dog do. Maybe he’s practicing to be a therapy dog in other ways, too, but for now I’m happy to have Diesel as a calming presence when he’s needed.
Pets