Are You A Sunrise Or Sunset Kind Of Person? 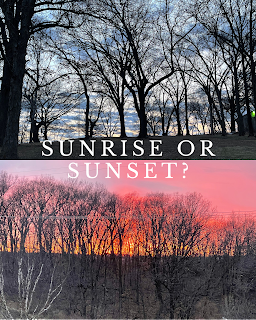 Sunrise and sunset look completely different in the country than they do in the city. Those beautiful morning colors creep over the hill and through the trees to usher in a new day. And in the evening they turn into flames as they find their way behind the trees to the west.
The question is: Which do you prefer, sunrise or sunset? As we read through the Bible this year, we’re already seeing how God works in the morning ... and in the night ... to touch the hearts and minds of His people.
Some of the best interaction with God in the Bible happened early in the morning.
Abraham rose early to stand before the Lord.
Jacob rose early to build an altar to the Lord.
Moses rose early to receive the 10 commandments from the Lord.
Joshua rose early every day for a week to circle Jericho as the Lord instructed.
Gideon rose early to talk with the Lord about His battle plans.
David rose early time and time again to pray and share his feelings with the Lord.
Jesus Christ often rose early and went to speak to the Lord in quiet, by Himself.
The women rose early to take their spices and perfumes to Jesus’ grave.
At the other end of the day, though, the setting sun and the hours of night are also supremely important to God.
The Lord’s presence in the pillar of fire could only be seen at the end of the day, as darkness fell.
Ruth met with Boaz at night when they could talk and not be disturbed.
The Lord appeared to Solomon at night, offering him whatever he wanted, and Solomon chose wisdom.
David spent many nights with the Lord, meditating on His word, praying and thanking Him for His many blessings.
Jesus healed people of many diseases as the sun was setting, those who were afraid to be out during the day.
God created the day and the night in the same moment, giving them each importance. While we may favor the sunrise that begins our day or look forward to the brilliance of a sunset to end our day, God loves them both. My prayer for this week is that we will find God in the morning, in the evening and everywhere in between.
Photos Scripture