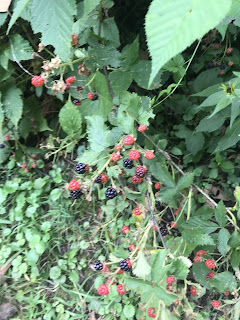 One of the best parts of my summer is going blackberry picking. I love tromping around the property and finding every single bush and harvesting every single blackberry I can find. It makes me so happy to bring a full container into the house, wash them up and figure out what I’m going to make with them. If you check out the Cooking tab on the side of this page or plug “blackberry” into the search bar, you’ll find dozens of recipes I’ve created to use up our blackberry crop every year.
This year has been weird, though. Usually I’d have harvested several times by now, but we still have more red berries than black ones. This is good because it means we’ll have berries for weeks to come, but it also made me put off going out to pick them this year. I’d casually look, see that they were red (or even still green) and figure I had plenty of time to get out there.
Over the weekend I went to three spots on the property that are known for their plethora of fruit. Along the driveway, there were a few smaller bushes that had already gone to seed, but the red berries outnumbered the blackberries by at least 10-1. I picked the few blackberries that were there and went farther back on the trail to the largest of our patches. I totally got my steps in for the day!
But as I walked up to the blackberry patch, I din’t see one hint of black - every single bush on that acre had already dried up and gone to seed. This is wonderful looking ahead to next year, but as of right this minute, that doesn’t make me very happy. I was all set to spend a couple of hours harvesting and had already picked out a couple of recipes to try.
I was angry. I was disappointed. I was even a little embarrassed. Here I could have harvested countless bushes and filled buckets with tasty berries, but I hadn’t gotten myself outside to do it. And in my head I was blaming everyone and everything. I was angry with myself for not getting up there sooner. I was upset with Danny for not letting me know they had turned because he drives by them on the tractor all the time. I even had a brief argument with God about several things related to weather and my laziness.
As I walked from the second spot to the third, I was already repenting of all that emotion. I really wasn’t upset with myself because there honestly hasn’t been that much time to be out and about on the property. I really wasn’t angry with Danny because he’s busy doing his work, which I greatly appreciate. And I definitely wasn’t upset with God for something as silly as missing out on some berries. It took the entire walk from one end of the property to the other, but I was back to something resembling normal by the time I arrived on the levee. 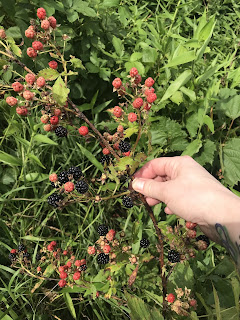 At first there weren’t many bushes and there weren’t many berries. I was a little surprised, but I kept walking farther down to a couple of larger bushes full of mostly red berries with a few blackberries thrown in for good measure. I wasn’t jumping up and down over them, but things were looking up.
And then I reached the middle of the levee. There in front of me were dozens of bushes so laden with berries that they had fallen over from the weight. There were definitely lots of red berries (yay for the days to come!), but there were tons of blackberries just waiting to be picked.
While I picked, I prayed. I thanked God for His bounty and for not giving up on me. I thanked Him for giving me the desires of my heart. And I thanked Him for the blessings that come even when we’re a little skeptical about how it’s all going to work out.
Trust in the LORD with all thine heart; and lean not unto thine own understanding. In all thy ways acknowledge him, and he shall direct thy paths. Be not wise in thine own eyes: fear the LORD, and depart from evil. It shall be health to thy navel, and marrow to thy bones. Proverbs 3:5-8
It’s in moments like these, and in moments that are so much more important, that trusting God’s wisdom instead of our own is like a lightbulb turning on! My path in this case, and in my mind, was to find berry bushes full of fruit so I would have to go back to the house for more containers. God’s path, on the other hand, was to take notice of my own selfishness and my own agenda for what it is - doubt. I couldn’t figure out why on earth I wasn’t being given berries. I just didn’t get it. But do was more concerned about my heart condition than a belly full of berries.
You may be going through something difficult and emotional right now, something you think you’ve got a handle on but is beginning to spin out of control. This is the time to turn it completely over to the Lord and let Him take care of it in His wisdom and in His timing. It is so much better to be directed in His path for you than to try to be wise all on your own. That’s why we get tired and frustrated, trying to do things in our own strength.
The healthy naval comes from blackberries, yes, but it also comes from peace that comes from knowing God is in control. Then if your berry bushes have already gone to seed or they’re filled to overflowing, you can rest assured that God has blessed as He sees fit. And that’s a wonderful path to be on.
On The Property Scripture