Cutting Bait And Starting Over 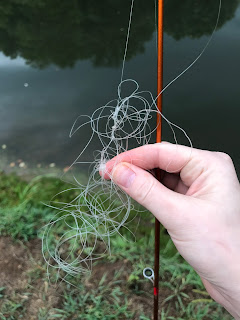 After our neighbors had great success fishing in our two ponds last week, Danny and I just had to go down and try for ourselves. We've been super busy with craft shows and our Etsy shop lately, so fishing took a back burner. This is a terrible problem since the ponds are just a 30-second walk away.

I hadn't been fishing very long when my reel wouldn't cast at all. I had somehow created the worst knot of fishing line I'd ever seen. It wasn't too tight to begin with, but the more I tried to untangle it, the worse it became. Soon there were two knots pulled so tight that I knew I wasn't going to be able to get them out.

Danny took a look and, after assessing the damage, decided it was time to cut bait and start over. He'd already pulled my line free from some under-water debris, and I'd freed it from the tree above the little pond, so I had no argument. It only took a couple of minutes for him to clip the line, remove the snarled mess and reattach the hook and lure. I had spent about 10 minutes trying to untangle it, and it took just a fraction of that time to replace it.

The results were almost immediate. Soon I had my first fish of the evening, and Danny had his right after that. We weren't as successful as we'd hoped, but we had so much fun that it really didn't matter. Imagine if I had let him clip the line sooner - think about how many more fish I might have caught if I hadn't tried to fix it on my own.

The spiritual application for that experience was pretty clear as well: you can waste your time and energy fighting against circumstances that you can't change, or you can cut bait, turn the situation over to God completely and watch as He claims the victory for you.

... let not your hearts faint, fear not, and do not tremble, neither be ye terrified because of them; For the LORD your God is he that goeth with you, to fight for you against your enemies, to save you. Deuteronomy 20:3-4

God is poised, ready to step in when we hand over the difficulties in our lives. He doesn't expect us to struggle with everything ourselves until we're at the end of our rope - He wants us to turn it all over to Him at the beginning. Think about how much we can accomplish, and much better our relationship with Him would be, if we weren't so prideful. It's so much smarter to let God have control instead of asking for help and forgiveness later when we're in the thick of things.

Is there something in your life that needs to be cut away and handed over to the Lord? I pray today will be the day we all set aside our prideful, selfish hearts and let Him start a new work in us. One that's free of tangles and ready to be used.
Photos Scripture