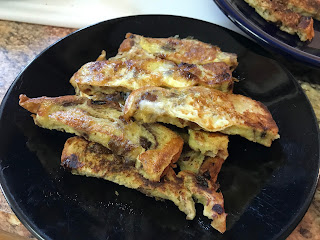 As I sat at the table Friday night trying to figure out what to cook with the girls at our teen Bible study on Saturday, I was at a complete loss. We've been meeting for a year now, and we've already made many of the dishes and treats they'd wanted to do.

That's when Danny suggested something simple like French toast sticks, but using our cinnamon raisin bread instead of boring old wheat bread. Now how smart is he? (The answer is very smart.)

So the girls and I tried it Saturday afternoon, and they said it was "way better" than regular bread. They also liked having strips of bread so it was crunchy all the way around instead of soft and mushy in the middle. Here's how they did it: 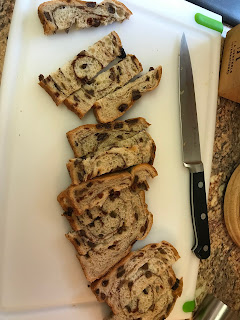 1. Spray a cast iron skillet with nonstick spray and heat over medium-high heat.

2. Cut each slice of bread into four strips.

3. Beat the egg in a bowl and add just a splash of milk, enough to thin down the egg.

4. When the skillet is hot, dip each strip in the egg wash and place in the skillet. Because they're small and thin, they won't take very long to brown.

5. When all the French toast sticks are done, serve them with warm syrup or powdered sugar ... or both!
Cooking