The Tale Of The Pumpkin 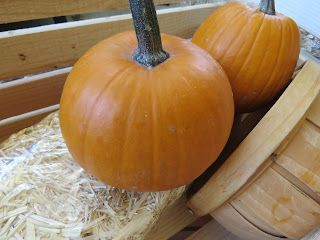 'Tis the season for finding pumpkins everywhere. You can eat them, drink them, make your house smell like them ... you name it, it comes in pumpkin for these few months.

Most everyone likes pumpkin pie, but there is one problem: no one likes cleaning it out. The pretty orange outside covers up stringy, sticky, gooey junk inside. Remember skipping that part as a child and just drawing a Jack-o-latern face on with a black marker? I was that child.

But until that internal mess gets removed, the pumpkin is pretty much useless. You can't take a bite out of it like an apple because of the seeds. You can't carve it up because the ickiness will just ooze out the holes. And you definitely don't want to make it into a pie until you've opened it up, scraped it out and washed it down. Only then is it fit for anything except decoration or pumpkin chunkin'.

Whether you realize it or not, you come before God just like this pumpkin. You're full of selfishness and a mess of emotions and lots of other ickiness. This stringy pile of stuff inside you keeps you pretty useless - how can you fulfill the Lord's plan for you when you're too full of yourself to listen?

God is more than willing to cut you open, get His hands messy and remove the junk that is holding you back. Yes, it hurts to get cut open, but it is necessary if you're going to let Him into the innermost part of you. Yes, it's going to be messy, but a little stickiness is nothing compared to the growth He has planned for you. Yes, having the junk in your life torn out is going to be uncomfortable, but the results will be worth it.

Would you rather hold on to your selfishness, or would you like God to give you a love for people? Do you want to keep that anger and resentment, or could He replace it with compassion and empathy? How about trading your tendencies of gossip, laziness or a lack of self control for the fruit of His Spirit? Those things don't just happen - they require letting the Lord do whatever He has to do to clean you out, cleanse your heart and get rid of all that ugliness.

What's left after all of this work and change is the sweet, fleshy part. Of you and the pumpkin. Once your pumpkin is clean of seeds and gunk, the possibilities are endless: lattes, pie, cookies, soup ... the list goes on and on.

The fleshy part that remains after God has His way in you is just as sweet. Your possibilities are endless when you let Him cleanse and renew you from the inside out. When you refuse to stay the same - wrapped up in yourself and refusing to let go of the stringy, sticky stuff - you'll find yourself ending up so much more wonderful than you began.
Around the House Scripture