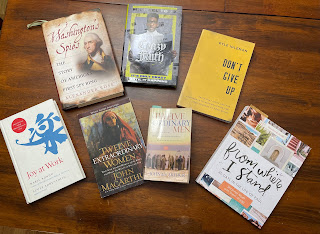 It's been quite a year. There have been so many ups and a few downs, but there has always been time to read a good book! I usually read two or three books a week, and that has been both exercise for my mind and good for my soul.
It's so difficult for me to pick my favorite books of the year - that's like telling the dozens of others that they're not worthy. And I don't need that kind of negativity in my life. Instead, I chose seven books that were just what I needed when I needed it, and my favorite sentence or two from each one. Hoepfully they will encourage you to read even more in the coming year, like they did for me.
Washington's Spies by Alexander Rose. "Inventing a workable code from scratch is a tall order. Today's cryptographers (who create codes, as opposed to cryptoanalysists, who break them) are fortunate enough to work for intelligence agencies able to draw on many decades of institutional experience. [Benjamin] Tallmage had no such luck. He lacked instruction manuals, professional advice, and even knowledge of which words to include. The code he eventually conceived may have been simple but it was not a bad one. Though it certainly wasn't up to the cutting-edge standards used by European diplomatic codebreakers, Tallmage was not obliged to shield his men from European diplomatic codebreakers. So long as it frustrated a casual reader, it would suffice."
Crazy Faith by Michael Todd. "The Bible says there are two things we need to overcome the Enemy and temptation (Revelation 12:11). The first is the blood of the Lamb. This is what Jesus did on the cross when He shed His blood so that we could be forgiven of our sins. The second is the word of our own testimony. My story of weakness is my weapon. Your story of weakness is your weapon."
Don't Give Up by Kyle Idleman. "Happy people are happy not because God have them the right set of circumstances to be happy. They're happy because God gave them himself, and that makes them happy. They swim in his love today and put their hope in the fact that today is short but eternal life is forever. They know they don't deserve God or heaven, but because of his grace, they have become recipients of an unimaginable gift. And that makes them something even richer than happy: it makes them content."
Joy at Work by Marie Kondo and Scott Sonenshein. "By organizing your work, you've given yourself a gift that goes far beyond a tidy desk, orderly calendar, or clean inbox. You've taken back some control of your work life."
Twelve Extraordinary Women by Jon MacArthur. "Most of them were unremarkable in and of themselves. They were ordinary, common, and in some cases shockingly low-caste women - in exactly the same way the disciples were common men. ... In each instance, what made them extraordinary was a memorable, life-changing encounter with the God of the universe."
Twelve Ordinary Men by John MacArthur. "They were twelve perfectly ordinary , unexceptional men. But Christ's strategy for advancing His kingdom hinged on those twelve men rather than on the clammoring multitudes. He chose to work through the instrumentality of those few fallible individuals rather than advance His agenda through mob force, military might, personal popularity, or a public-relations campaign."
From Where I Stand by Shanna Noel and Sherri Gragg. "As [Saul] struggled to his feet, he began to grapple with the realization that being loyal to the one true God didn't mean faithfulness to the temple, but to Jesus. He had a new mission as well. Jesus wanted him to join forces with the very people he had been persecuting in spreading the good news that the Messiah had come."
Around the House