Arranging A Tiered Tray For A Thanksgiving Centerpiece 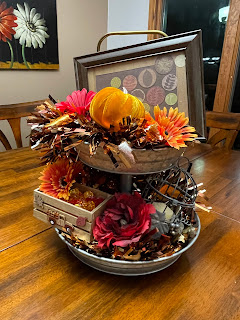 If I had to go out on a limb, I'd say I've done different arrangements in this two-tiered tray for probably seven years. It's held hearts in February, flags and patriotic garb in July and lots of red, white and green in December. I've probably only created one fall centerpiece with it, so it shall be done! 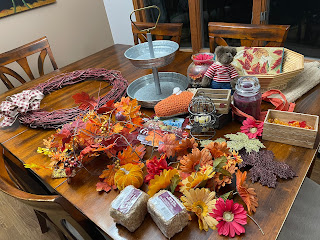 Almost everything I found in the fall plastic tote was either from the dollar store or on steep clearance between holidays. After I made my fall wreath last week, I took all the leftover bits and combined them into the most beautiful Thanksgiving centerpiece. 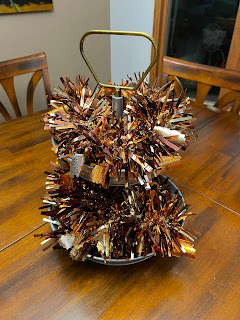 I usually begin with some kind of garland draped across the tiers. Then it looks like the pieces are floating in midair, nestled in the garland. Magical, right? The largest anchors, in this case, the framed picture, pumpkin, wire cage and wood crate, alternate back and forth in an interesting layout for the eyes. 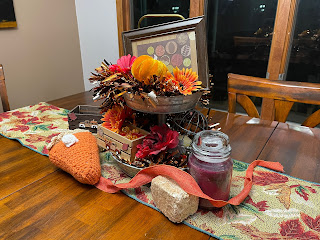 Then the little bits get tucked in, and there you have it! I had enough bigger pieces that I set them up around the bottom on the table runner and wove a wired ribbon through. I challenge you to see what holiday decorations you have that could make the prettiest Thanksgiving centerpiece ever!
Crafts