Noah's Ark: Beyond The Kindergarten Version 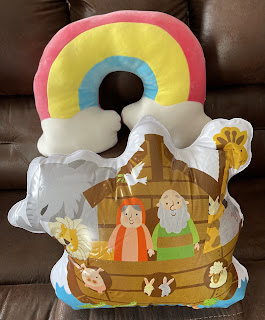 Every now and then I let our teenagers pick the topics they want to learn more about, and it's always interesting to see what they pick. We've studied the book of Job, how to make Jesus part of our everyday lives and Revelation and the end times, all because it was something they didn't know much about.
A couple of weeks ago one of our girls picked Noah's ark. I made a comment recently that there were more than two of some animals on the ark, and the crowd literally went wild. Oh no, Mrs. Laura, it's two-by-two! So in the interest of Bible truth and accuracy, I made a whole lesson for them about Noah, the ark and the flood.
Here are just a few of the points we talked about that go well beyond the kindergarten version everyone remembers - how many of them did you know?
1. In His anger, God reduced man's age from hundreds of years to 120 years. (Genesis 6:3)
2. Gopher wood was probably Cyprus wood, and pitch was a coating to water-seal the ark. (Genesis 6:14)
3. Man had never seen rain, had no idea what a flood was and didn't know what a boat was. (Genesis 6:17)
4. God was already in the ark when it was time to leave. (Genesis 7:1)
5. While the unclean animals were brought in by two, the clean animals and the birds were brought in by sevens, so they could be used for food and sacrifices. (Genesis 7:2)
6. God gave Noah a seven-day warning so he could get his affairs in order. (Genesis 7:4)
7. Since the 120-year-old rule didn't apply to him, Noah was 600 years old when the rain began. (Genesis 7:6)
8. Noah didn't close the door of the ark - God did! (Genesis 7:16)
9. It rained for 40 days, as God said it would. (Genesis 7:17)
10. The water level rose 15 cubits, or just over 20 feet, above the highest mountain. (Genesis 7:20)
11. But the flood waters stayed for 150 additional days. (Genesis 7:24)
12. As the waters began to recede, the raven went out and didn't come back, presumably because it found dead things to feast on. (Genesis 8:7)
13. The dove went out three times, the first time coming back with nothing, the second time with an olive branch, and the third time not coming back at all. (Genesis 8:8-12)
14. As soon as Noah, his family and the animals disembarked, he built an altar to the Lord and offered those clean animals and birds as a sacrifice. (Genesis 8:20)
15. It was this sacrifice and sweet savor that convicted God's heart to never destroy the earth by a flood ever again. (Genesis 8:21)
Scripture Sunday School Youth Group