Put Away The Ornaments, Not The Christmas Spirit! 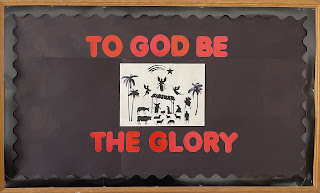 I often wonder how long after Christmas other families wait to take down their decorations. Is it the day after the celebrations are over? A week later? After the New Year? Sometimes I see outdoor decorations hanging around until the summer - or they never come down at all!
Whatever time you choose to trade out your Christmas decorations for winter, or a warmer season, make sure you don’t pack your Christmas spirit away in that box, too.
And when they had seen it, they made known abroad the saying which was told them concerning this child. And all they that heard it wondered at those things which were told them by the shepherds. But Mary kept all these things, and pondered them in her heart. And the shepherds returned, glorifying and praising God for all the things that they had heard and seen, as it was told unto them. Luke 2:17-20
The shepherds had just had the experience of a lifetime: angel conversations, multitude of heavenly host, a meeting with the newborn King and seeing the small family in the camel shack where they found them. So what do they do with this knowledge of the Messiah’s arrival? Do they go back to business as usual? Do they write about it in their journals and then forget about it until this time next year?
They made it known. They shared their stories as far and wide as they possibly could. With no modern technology, that meant word of mouth, and this was a story they couldn’t keep to themselves! Imagine the shepherds telling the very first people they saw that the Saviour of the world had arrived on earth. Then they went on to the next group while the people who just heard it told someone else, and someone else, until the whole area was stirred up about the news.
Did the shepherds return to their flocks? Yes - verse 20 tells us they did. But as they went they were glorifying and praising God for every single thing they had just witnessed. They continued their lives, but nothing would ever be the same. An encounter with Jesus Christ changed their lives forever.
You and I have that same opportunity in the days and weeks to come. We have just celebrated the arrival of our Messiah on earth, and we have a choice. We can return to our ordinary lives today as if nothing has happened. Life still happens, regardless of what holiday season it is, right? But the difference in the Jesus in our hearts, not the date on the calendar.
I would much rather start my new week with the joy and peace of Christmas in my heart, fresh and stronger than ever before - wouldn’t you? We’ve just had an encounter with the same Jesus the shepherds met, so shouldn’t we be returning to life, glorifying and praising God for all the things we have heard and seen?
So think for a moment about what you’ve seen and heard and experienced during Advent and Christmas. Check out the places in your heart that have been changed for good by the beginning of Jesus’ life story. Then make it known, share it, tell the story, offer your testimony of salvation and celebration with someone who desperately needs to hear it. Be a shepherd today and tell your story while you give God all the glory He deserves.
Christmas Scripture