Hymns Of Christmas — Angels We Have Heard On High 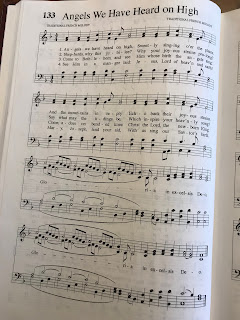 When the angels arrived at the field, they already knew the song they were going to sing. Like a professional choir that rehearses for hours before the performance, the multitude of the heavenly hosts sang words they'd been practicing for ages past.

Gloria in excelsis Deo!
Glory to God in the highest!

What better song could the angels have sung on this special birthday? Who but the angels could have understood the mystery and power behind the tiny child they put to melody?

The birth announcement for the Messiah was filled with glorifying God for this amazing blessing. He, at His highest, sent His Son to the lowest, down to us. And the shepherds He sent the angels to were considered low in their own rights. They would have been on the bottom rung of the ladder, so to speak.

Are you singing of the Savior's birth this week before Christmas? Echo back the joyous strains that the angels knew by heart - Gloria in excelsis Deo! Glory to God in the highest!
Christmas