Lessons From A Cow Bird 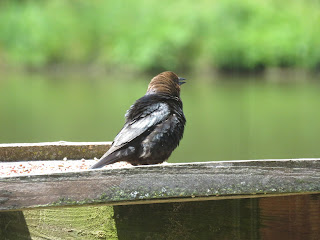 Here in Iowa, we have cows and we have birds. We also have cowbirds, like the one pictured here. It's a very average, dull-looking bird, just black and brown and not much to look at.

We have these cowbirds at our feeder every single day, but you really don't notice them. They're not pretty like the cardinals, not as large as the bluejays and not nearly as cute as the nuthatches. They're just not a special bird that you would write home about.

Until you dig a little deeper into their characteristics. Cowbirds are considered parasitic birds. They won't build their own nests, instead laying their five to seven eggs in another bird's nest. One bird guide I read says that cowbirds have been documented laying their eggs in the nests of more than 200 different species of birds.

And it's incredibly interesting that while some birds will reject these foreign eggs, most will actually raise them as their own. For tiny birds like starling and warblers, this means raising babies twice their own size! Doesn't sound like cowbirds have the greatest parenting skills, does it? Freeloaders.

I challenge you to take some time this weekend to notice the world around you. Maybe you'll want to watch the birds for a time like I did, or you might want to walk some local trails, go to the park for a picnic or just prop your feet up by the pond. It's ok to just be still and quiet for a while every day. It's in these moments that we observe, question and learn more about the way God's creation works and thrives.
Around the House Photos