A Weekend of Time Alone 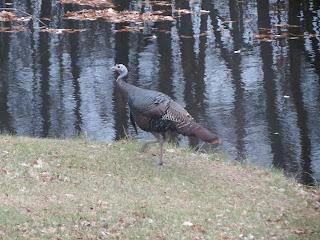 It's a dark, cloudy morning in southern Iowa today.

On one side of the house, I watched six enormous turkeys run for their lives across the driveway. I'm not exactly sure what they were running to or from, but apparently they were just panicked enough to head for the hills - literally.

On the other side of the house, though, it was an entirely different story. There was one lone turkey, taking his time and scratching for a little breakfast. He wandered around the small pond, and in a few minutes he ambled up into the trees.

Now, I don't know a whole lot about turkeys, but I see a lot more running around the crew on the driveway tan I do the one who was making a day it of it. It seems as though the scared, hurried mentality is more prevalent than the serenity.

Unfortunately, I am guilty of the same thing.

And when he had sent the multitudes away, he went up into a mountain apart to pray: and when the evening was come, he was there alone. Matthew 14:23

Jesus wasn't escaping from anything - He was headed for something. After a busy time in the multitudes, He was looking forward to time alone with His Father. He left for the mountain alone so that He could rest and rejuvenate, sure, but there was a need to be alone and pray. That's what would refresh Him more than anything else.

Make this a weekend of time alone. Carve out a few pieces of time that are specifically for you alone. Don't think about running away or escaping the world. This isn't about other people - it's about you and the Lord.

Find what you need in Him. That's what happens in your time alone.
Photos Scripture