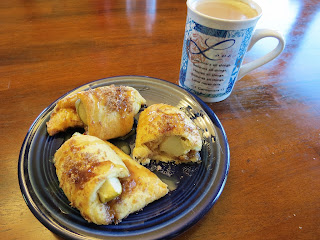 We've had these brown sugar-cinnamon apple bites for breakfast twice in the last week. They're just that good!

And yes, I took that bite out just to show you the inside. That's the sacrifice I'd make for a great picture!

They combine the healthiness of fresh apples with the ooey-gooey goodness of sweet and spices. It doesn't get much better than that ... and at breakfast, even. 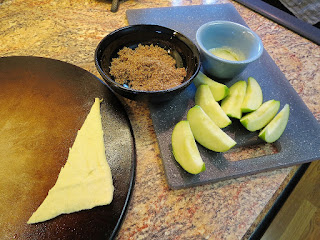 Preheat the oven to 350 degrees.

Combine the sugars and cinnamon in a bowl. The amounts I gave are just estimates, so adjust them to suit your taste.

Melt the butter in a microwave-safe dish.

Cut the apple into eight slices. 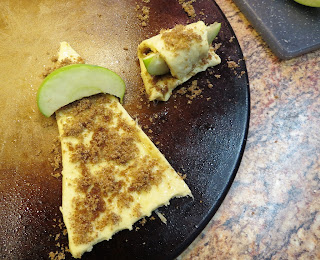 Lay each crescent out on a lightly-sprayed baking sheet. Brush with melted butter. Sprinkle with the brown sugar-cinnamon mixture.

Place one apple slice on the crescent and roll it up.

Sprinkle more of the mixture on top.

Bake at 350 degrees for 13-15 minutes, until it's all brown and bubbling and lovely looking.

Serve warm. Serve with ice cream. Serve with caramel sauce. Serve them straight off the baking sheet. It doesn't matter - they'll be gone so quickly, you might miss it.
Cooking