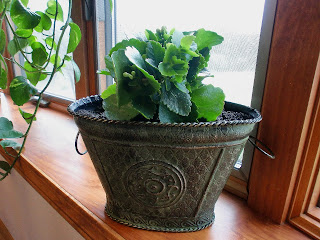 I just had to give you an update on a past post. This is the little plant that I repotted in late March. Three others had died, and I desperately wanted to keep this one alive.

So I repotted it in a much larger container, added nutrient-rich soil and watered it every other day or so. It gets tons of sunlight in our dining room's bay window, so I hoped that it would do well in its new environment. 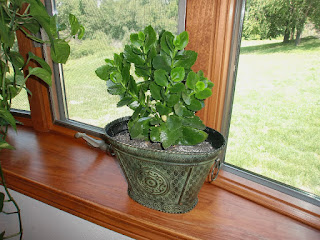 And it has! This is it today, three months later. It is about three times the size it was and has completely unfurled all of its leaves.

It needed a little pruning from the bottom as it grew because there were a few rows of leaves that just didn't make it. But the ones at the top are strong and thick and waxy, just like they're supposed to be.

Soon it's going to have to be replanted again, and it will probably go outside this time. It's thriving in here - I can't wait to see how much more it will grow with unlimited space!
Around the House