Where The Deer And The Coyote Play 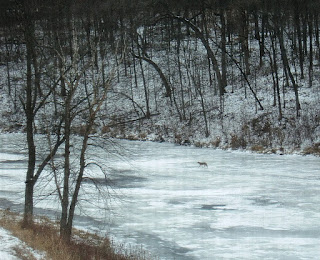 OK, so that's not how the song goes, but that's the scene on our property these days. We've seen deer just about every day over the winter, including a very handsome 10-point buck.

And just this past week we were shocked to see what we're pretty sure is a coyote walking across the big pond. We had heard them talking to each other in the night, but this was the first time we'd seen them during the day.

We learned that January and February are the coyote's mating season, so being out and about it a little more frequent. But it also means we can't let the dogs out off-leash by themselves.

After doing a fabulous online search, I learned that coyotes will fight anything and everything during this mating season - except people. The two ways to avoid coyotes "interacting" poorly with pets is to keep them inside at night, keep them leashed and just be present. If people are within sight, coyotes will, in general, stay as far away as possible. This creates a wider perimeter for contact.

While they're amazing to watch from the window, this is as close as I will ever purposely get to this beautiful creature. I'd rather not expose my girls to them and that means we 'll just growl at them from the safety of the sun room window.

Let the deer and the coyote play. At a distance.
Pets