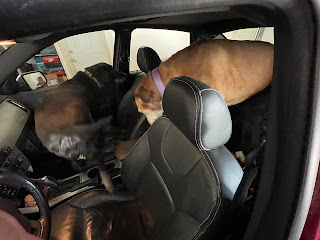 The manufacturer says the interior space of a 2009 Ford Focus is 93 feet cubed. This seems like a substantial amount, until you but three black labs and a Great Dane in there. Then it is surprisingly tight and supremely cozy. 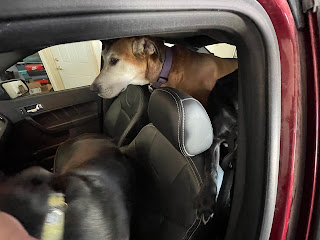 When I called to make vet appointments for all four dogs, I told them they were large and we could take them in two trips. But they were convinced they could handle them all, so the five of us piled into the car and headed that way. Luckily their office is only a few minutes away, because we were a little too close for comfort in the car. It's a good thing we love each other. 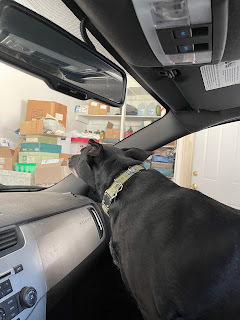 They will usually sit down and relax if I crack the windows and let them smell all the smells. It's the one way to keep them from jumping back and forth over the seat, stepping on each other's feet and crying incessantly. No...those things would never happen, right? 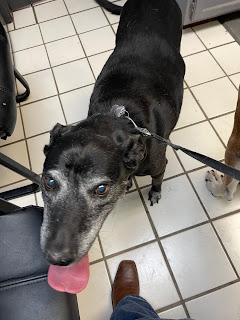 I took Callie and Diesel in first, mainly because they have no serious problems that I'm concerned about. They got their shots and a treat before heading back to the car for a changing of the guard. Then it was Parker and Molly's turn, and they're the easy ones. They both have some joint pain and Parker has a few lumps the vet wants us to keep an eye on, but beyond they that they got all the cuddles and treats and were ready to be reunited with the rest of the pack. 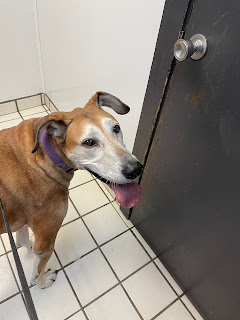 I assumed they would enjoy being in the exam room rather than the car, just because it's bigger and has room for them to move around in. But no, they just wanted to be together, the four-pack that refuses to separated for long. So back into the car we went, shoulder to shoulder and ready to take on the world!
Pets Photos