April 27, 2018
In our Wednesday youth group gathering this week, we continued our verse-by-verse study in the story of Joseph. This segment focused on Jospeh's reaction to the brother's first appearance in the Egyptian palace to buy food for their large family.

At this point in the story, the 10 men were recognizable, but their brother Joseph wasn't. They would have remembered the 17-year-old boy, not the grown man in Egyptian finery who was prime minister of the country. When Joseph questions them, he uses the word "spies" repeatedly to describe and accuse them. But their words are different: servants, sons, true men, brethren. The way they saw themselves was very different compared to how the thought Joseph saw them.

To illustrate the idea of identity of a Christian, we gave each teen an index card and had them write down two or three of the worst things anyone had ever said about them. No one else would read it - they would just write them down and fold the card in half. It was interesting to hear a few stories about who in their lives has spoken in ugly ways to them. It got pretty emotional, which gave us lots of opportunity to talk and share.

Then we had them bring their cards to the trash can, where we had set up a shredder. As they put these nasty, ugly cards through the shredder, we reminded them that those insults and derogatory words mean nothing because they're not true. Those angry, hurtful people's words may hurt, but they're not what's important. 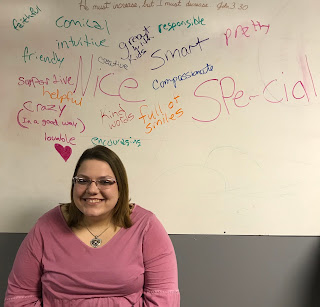 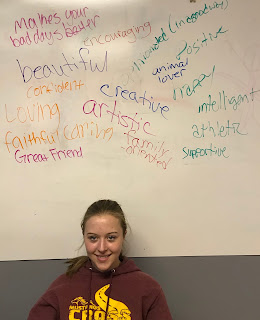 The next step was the best part of the whole evening. We had each one sit with their back to the white board, and we wrote the characteristics we love about them. They had no idea what we were writing, only that we were joking, laughing and correcting each other's spelling. When each board was filled, we took their picture and let them turn around to read what their brothers and sisters in Christ think of them. I'm not sure if I'm the only one who cried.

Then we shared two pages full of Scriptures that describe who we are in Christ, and we told them that this is the most important identity they have - not what their peers, friends, family or church think of them. The Bible references were noted beside each one so they'll be able to do an independent study. We're excited to see how the Lord will change the lives of these teens when they learn and take to heart how He sees them through the shed blood of Jesus Christ.
Scripture Youth Group