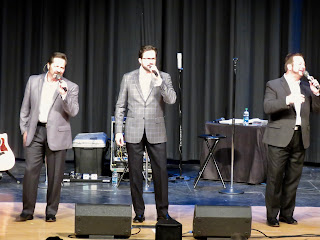 We were so blessed to be able to attend the Booth Brothers' concert in Pella last weekend. It had been at least three years since we'd seen them in person, and their music touched our hearts in so many different ways.

I have always loved their song "The Blind Man Saw It All," and hearing it in person is amazing. "A Moment Of Grace" meant a lot to us this year as a couple, and being invited to sing with the Booth Brothers on several hymns was the icing on the cake.

While the songs were a testimony in themselves, we were also moved by the preaching between songs. One nugget in particular was especially powerful.

Even knowing that I would sin, God created me anyway. He knew where I would reject Him, walk away and do incredibly selfish things, God decided there needed to be one of me in the world. And because those sins would separate me from Him, He sent His Son to die in my place. That kind of love will never be found here on earth, but we'll lavish in it for all of eternity. Hallelujah!

But God commendeth his love toward us, in that, while we were yet sinners, Christ died for us. Romans 5:8