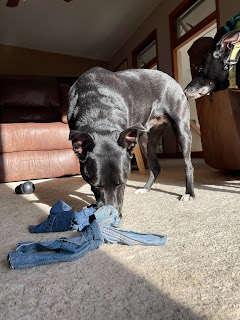 Your dogs may be motivated by toys and absolutely in love with them. Not ours. Ours are cuddlers, not players. But when they get a hold of something new - and something they can fight over - they're completely happy. 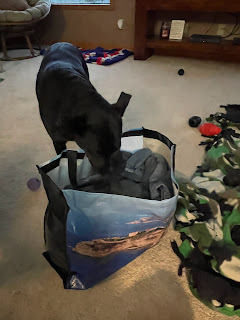 While cleaning out the spare bedroom closet, I found this huge bag of scrap denim. By scrap, I mean that I've cut the pockets out of old, trashed jeans to use on the front of handmade journals. The rest of the denim went in this bag and was tucked in the closet. (As if writing it this way makes it sound like someone else did it...) 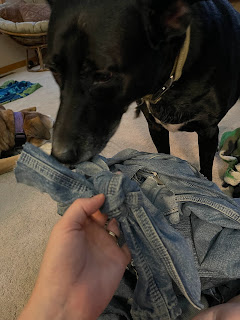 And, apparently, they smell really good because the dogs were all interested in them - even before I knew what I was going to do with them. They were going to become dog toys! 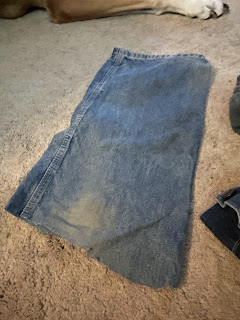 They're so easy to make that I don't know why I didn't just make them, instead of putting them in the closet. I cut all the way down on either side of the long seam, whether it's pants or skirts. 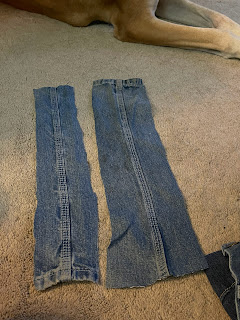 They don't have to be the same width, just a similar length. 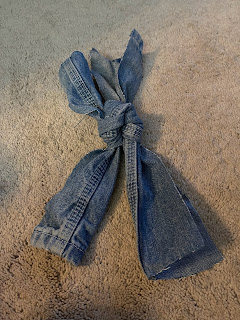 Then I double knot them in the middle and pull everything tight. 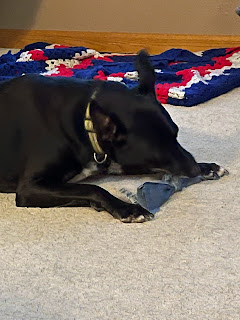 And that's it. Seriously. Callie and Diesel love them, but the big dogs really don't care. 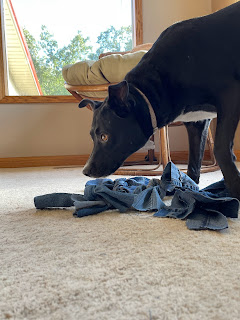 Callie's pretty suspicious of the other dog's potential for taking her stuff. She'll growl like a big dog, even though she's the littlest. 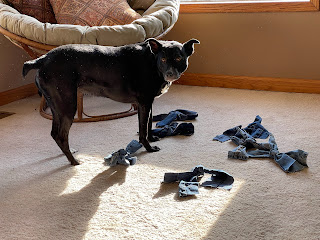 Once I had six or seven done, I threw them all out on the floor and let them have at it. Callie immediately claimed the entire pile as her own. 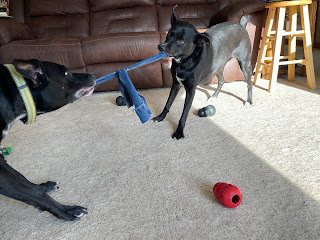 That didn't sit well with her brother, who had been so patiently waiting for me to get them done. Diesel grabbed one end to get it away from Callie, and the tug-of-war was on! 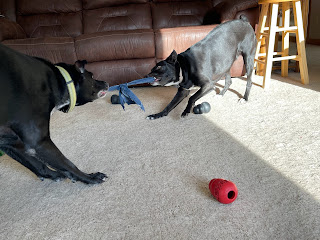 This is pretty typical for our house, even though it sounds like they are going to rip each other's teeth out. Anything that's easy to make, upcycles something I would normally throw out and keeps these two occupied for a few hours is totally worth it in my book.
Crafts Pets