Rejoice Because Jesus Passed By 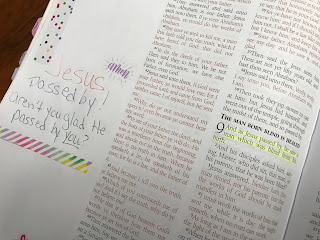 In the very first sentence of John’s account of the blind man healed, we read those amazing words: Jesus passed by. This is the third time in the Gospel we see that Jesus passed by someone and changed their lives.

In Matthew 20, two blind men were sitting by the side of the road when they learned that Jesus was coming their way. Hearing this, they cried out to Him in faith. When He asked them what they wanted Him to do exactly, these men both replied that they desired nothing more than to have their eyes opened.
So Jesus had compassion on them, and touched their eyes: and immediately their eyes received sight, and they followed Him. Matthew 20:34

In Mark 2, Matthew (Levi) is sitting at his desk, minding his own business collecting taxes, when Jesus passed by him. And in a moment his life was changed forever.

And as he passed by, he saw Levi the son of Alphaeus sitting at the receipt of custom, and said unto him, Follow me. And he arose and followed him. Mark 2:14

In both of these accounts, Jesus passed by someone who had never met Him before. When He stopped, He turned their world upside down with just a few words and simple actions. That’s the power of Jesus Christ - coming into the life of someone who needs Him and changing them completely.

The result in both of these stories was the same: the three men all rose and followed Him. There was no hesitation, no thinking about it and no time to talk themselves out of it. Jesus spoke to them and they responded in faith. What a beautiful picture of the powerful effect Jesus has on people.

Now in John 9, Jesus is passing by a blind man on the side of the road. (Jesus loves opening the eyes of the blind, even today.) This time, we hear a conversation about the law and sin and other topics that the disciples didn’t understand.

For the rest of the chapter we read how everyone tried to catch Jesus in a trap of words and tried to accuse Him of being something He wasn’t. They question the man and his parents over and over, until you can hear the exasperation in his voice.

At a time in this man’s life when they should have been rejoicing of the miracle of healing, the religious leaders were more focused on Jesus’ law-breaking than with the fact that He had just touched a blind man’s eyes and made him see. They missed out on the joy of being awestruck. They looked past His compassion and threw petty accusations at Him. How sad for them that they weren’t able to find joy in a situation that was worthy of celebration.

Aren’t you glad there was a day when Jesus passed by you? He caught your attention and then changed the course of the rest of your life! And I would guess that you weren’t tied up in how it happened, but rather rejoiced that He chose to come to you. That is the miracle of compassion and salvation. He didn’t have to pass by - but He wanted to.

I pray that this weekend we’ll have the boldness and opportunity to tell one person about the day Jesus passed by us. Then we’ll be able to tell the personal story of what He has done in our lives, and that can open the eyes of someone else who needs Him, too.
Scripture