Sadie Gets Lost - Sort Of

October 24, 2012
One of the nice things about Sadie is that she's a mama's girl. She doesn't have to be on a leash when we're outside like her big sister does. I never have to worry about her going too far away because she has to be in eye-sight of me at any given moment - indoors or out.

I should say ... normally she has to be in eye-sight of me at any given moment - indoors or out.
This weekend I had one of the biggest scares I've had in a long time. I took the girls out for a short walk just like we do several times a day. I don't know if Sadie caught a whiff of something or just needed to stretch, but all of a sudden I realized she wasn't with Bailey and me anymore.

Normally this wouldn't be a problem. Call her name and she'll come at top speed just so you won't leave her behind. 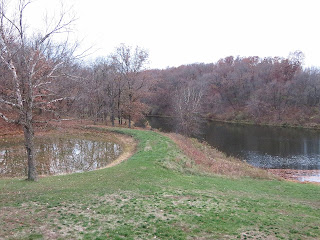 This was the last place I saw her, on the levee headed for the other side of the pond. So that's where I headed. I made my way all along the edge of the pond, clear back to the burned out tree, which is at the base of the path that runs the edge of the property. And I kept calling her name.

All of a sudden I realized how close to the highway she'd be if she went that far. And then I put that thought away and called her name some more.

The I started to wonder if she even knows her own name...

Soon I backtracked to the house. I had already texted Danny, cried a little, prayed a lot and finally decided to search in the other direction.

That's when I saw her. 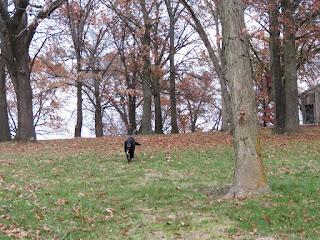 Sadie had finally heard me and seen me turn the corner of the house. She came barreling down the hill from the barn - the opposite direction from the levee where I'd seen her. She'd either circled all the way around or cut back when I was taking her sister inside.
I was all prepared to have words with her over wandering and worrying me, but that was the furthest thing from my mind. I actually sat down on the driveway and cuddled her for a few minutes before we went back inside. How can you look at that face and not know that you're loved?﻿
And that was our adventure for the day ...
Pets