A Little Gray Around The Edges 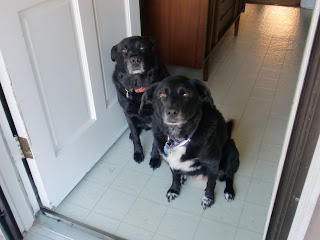 I can tell the girls have reached middle-aged: they're going gray, Sadie's slowing down a bit and they've both changed their attitude over the years. I'd like to say they've mellowed out a little, but it's actually the opposite.

As dogs age they have different needs and issues than when they were puppies. (But the girls will be perpetual puppies, I'm sure.) The only thing that gives their age away is the gray around their muzzles. I think it looks distinguished.

Most noticeably, older dogs gain weight much more easily than they did when they were younger. They tend to be less active and we baby them with more treats because they seem so pitiful. Talk to your veterinarian about balancing amount and kinds of food with the activity level of your pet.

Sadie has severe hip dysplasia in both back legs, and the limping has gotten more noticeable as she's aged. Hip dysplasia and other degenerative conditions appear more frequently as dogs age, so be aware of changes in walking, running, sitting and laying down. See the vet about pain control medications if the conditions worsen.

Exercise is just as important in older dogs as it is in younger ones. They might not last as long on a walk as their puppy companions, but exercise is vital for respiratory, skeletal and muscular health. Take shorter walks and play less rigorous games. But don't cut everything out or you'll have a bored, fat, lazy dog instead of the best friend you have now.

Did you know that senior dogs can have dementia just like humans can? Often it starts with mood change and then forgetting their house training and socializing less with their humans. In all honesty, Bailey has been showing some of these signs every now and then. But this is also the dog who walks into a room, forgets why she's there and walks out again. There are lots of ways to battle this dementia, so talk to your vet about the options, like finding food with more antioxidants when you notice these symptoms.

We've decided that we're not going to slow down until the girls slow down. They may have a few years on them, but they're still active, happy and healthy. Of course they each have some troubles just like their humans do, so they're just taking life one day at a time - stopping to smell the roses, and whatever else happens to be laying around.
Pets

September 15, 2009
One of the characteristics of a woman who is leading a victorious Christian life is virtue. A virtuous woman is willing to conform to both moral and divine law, someone who glows with purity and goodness. Sounds like an overwhelming goal, doesn't it? Well, just like everything else in our lives, God has given us exactly what we need to triumph in the virtues He would have us attain.

"And now, my daughter, fear not; I will do to thee all that thou requirest: for all the city of my people doth know that thou art a virtuous woman" (Ruth 3:11).

Ruth was a poor widow, one who chose to leave her native Moab for her mother-in-law's home town of Bethlehem. She was given the choice to stay behind, but her relationship with Naomi was more important. Ruth was devoted to both her former family and the new family that would greet them (Ruth 4:15).

While she was forced to work in the fields to supply the household's needs, Ruth worked with diligence and stamina. In the second cha…
Read more

We're having so much fun putting together goodie bags and door prizes for our upcoming ladies retreat at the church. So many of our ladies have donated craft supplies, decorations, time and energy to treat our visitors to an amazing time. These keychains are just one of the gifts some of the attendees will find in their bags.

All you need to make them are a variety of beads, some fairly thin yet sturdy cord and a jump ring.

Cut a length of cord, fold it in half and string it through the jump ring.

String matching beads on both sides.

And tie it off with a double knot. So simple, yet so pretty.

Here's another variation: Cut a length of cord, fold it in half and thread it through a jump ring.

Tie one or two beads on one side and tie it off with a knot.

Make the other side longer with additional letters and beads before tying it off.

Make a variety of lengths, colors, patterns and phrases so no two are alike.
Read more

My sweet and loving husband gave me my birthday present three weeks early.

I had asked Danny for a bench that I could put down by the big pond. I wanted a place where I could go, pray and relax away from the struggles of the day. He blessed my heart in so many ways by creating this bench out of landscaping timbers with his own two hands. His talents amaze me all the time.

But what meant even more was that he was willing to brave 110 degree temperatures to finish this just for me. That speaks volumes about the loving heart of this wonderful man. Thank you, Sweetie!

I'm so excited to get it down by the water and spend some time with the Lord. The first thing I want to do is thank Him from the bottom of my heart for the husband He gave me. I'm blessed beyond measure.
Read more

Today’s meditation: God’s faithfulness to David when he was in distress is the same faithfulness we can rely on today when our own circumstances spin out of control.